The Law Office of Steven H. Berniker's employees are highly-trained, experienced and dedicated to the success of our business.

Steven graduated from the University of California Berkeley with his Bachelor's degree. He attended UC Hastings Law School and has been a practicing attorney for over 25 years. Steven has a wealth of experience in family law and has been active in the Sacramento community for many years. Steven enjoys swimming and walking his dog Pancake.

Matthew graduated with his B.A. in International Development Studies from UCLA in 2007. He attended McGeorge School of Law, graduating with his J.D. in 2012. Matthew is an avid fan of Volvos. He enjoys fishing and camping in his spare time. 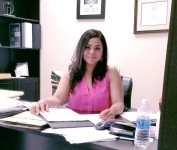 Vanessa Navarro graduated as a Paralegal in 2011 from The University of Northern California Lorenzo Patiño School of Law and Paralegal. Navarro has worked for the Law Office of Steven H. Berniker, APC since June 2012, assisting Attorney Berniker in family law matters. Vanessa is fluent in Spanish and is active in the community. She is currently working towards her Associates Degree and is on the path to one day becoming an attorney.

Rafael graduated as a Paralegal in 2011 from The University of Northern California Lorenzo Patiño School of Law and Paralegal. Rafael assists  Attorney Berniker in the Social Security practice area. Rafael is fluent in Spanish and is also a Consultant for OVC. Rafael has spoken at a panel in Washington, D.C. and has also participated in plenary sessions in Atlanta, GA and Chicago, IL. He is also a member of DELAC and LCAP in the San Juan School District.

Camie Jo graduated in 2009 with her Associate of Arts in Human Services Management from University of Phoenix. Camie Jo is a wife to an Army Veteran, as well as a military mom. She is passionate about her work and helping veterans receive the benefits which they are entitled. She is a Michigan native and is completely immersed in her family, friends, and new found career.

Breandon is from the Sacramento area and graduated from SAVA High School in 2015. He brings a positive attitude and strong work ethic to the Law Office of Steven H. Berniker. In his free time Breandon enjoys outdoor activities and sports. He is also interested in conservation and has participated in activities to clean up the American River.